You seem to be using an unsupported browser

Understand NDIS demand in your area

The NDIS Demand Map is a new data analytics tool that provides information to help providers to grow in the NDIS.

Use the NDIS Demand Map to help understand the services and locations NDIS participants may choose by 2023.

What is the NDIS Demand Map?

The NDIS Demand Map provides an up to date forecast of the NDIS demand by postcode across Australia.

Use the map to find out:

What are the forecasts based on?

The forecasts use de-identified NDIS and other data (census, Department of Social Services data) to predict what the NDIS will look like by 2023, when it is fully operating and the growth of participant numbers starts to ease.

The forecast will be updated regularly based on new NDIS data as it becomes available.

It is important to note that this model is based on participant spending patterns to date. This pattern may change in the future if their preferences change.

How should you use the forecasts?

The Demand Map provides a forecast range for future participant numbers, spending and workforce. This range reflects the inevitable uncertainty in making forecasts, particularly in areas where the NDIS has not been operating for long or areas with low populations. 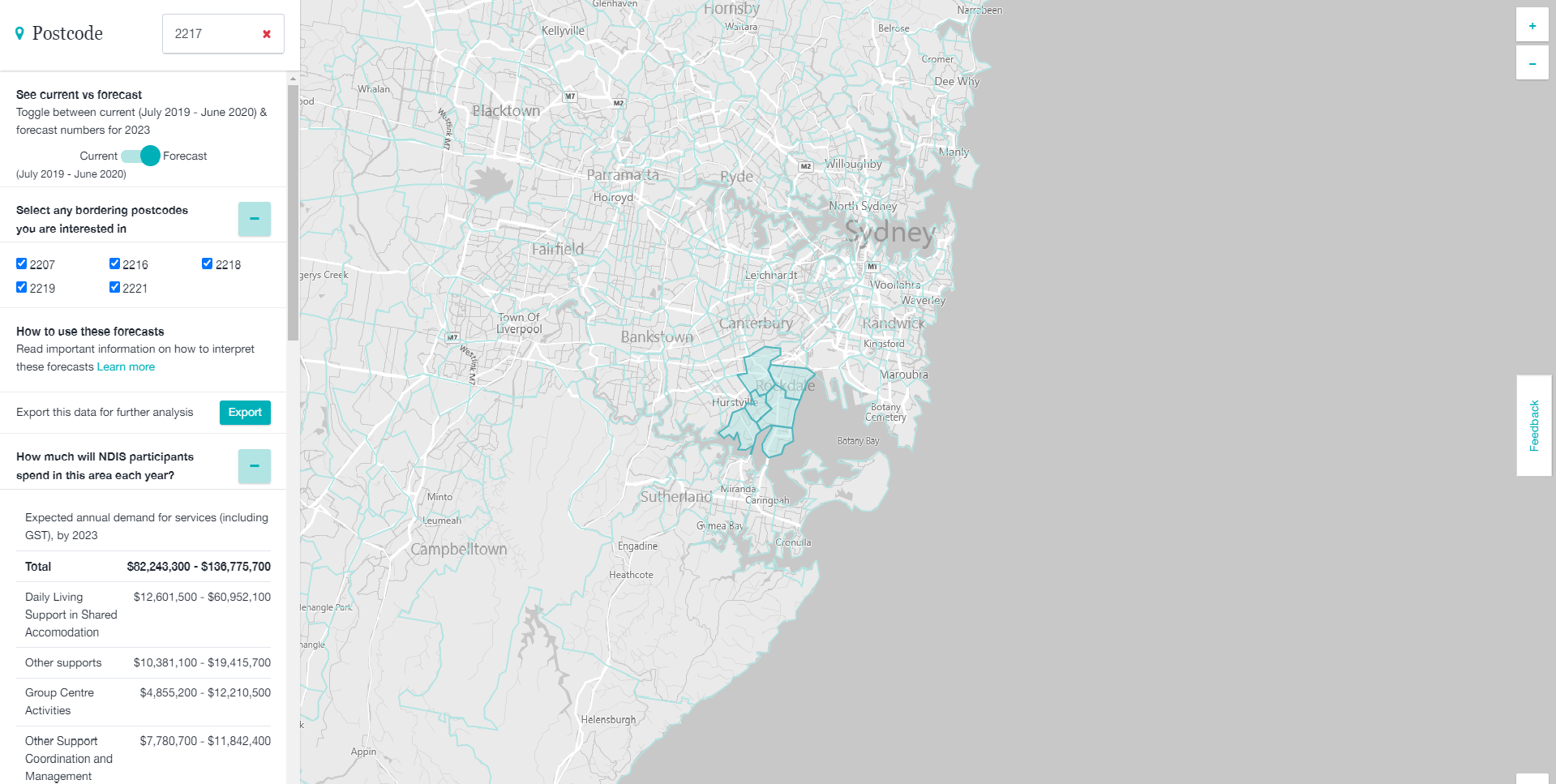 We expect 90% of postcodes to fall within the reported ranges; but not necessarily the midpoint of the range.

Website users should not sum categories or sum totals across postcodes, as this will produce inaccurate results.

Users should make their own assessments when using this data.

Tell us your views

We welcome any feedback you have on how we can improve the Demand Map. Please send your views through our feedback form.

What is and isn't captured in the forecasts

The Demand Map uses a 'Random Forest Regression' statistical technique to forecast NDIS participation, and a ‘Multivariate Linear Regression’ (MLR) to forecast spend and required workforce to deliver these services. The model draws on census data, NDIS administrative data and Department of Social Services data from over 2,500 postcodes in Australia to project the number of participants in each postcode, and the expected value of spend per person for different categories is estimated for these participants using the MLR model. Only summary statistics at a postcode level are used in modelling, such that individual data observations are not linked across sources. Job estimates are inferred from a projected volume of services to be delivered to these participants.

Data used in this modelling includes NDIS data by postcode and underlying postcode aggregate data from the Australian Bureau of Statistics and the Department of Social Services.

The Random Forest (RF) model estimates relationships between these data sources and NDIS outcomes, by generating multiple decision tree models to assign dependent variable estimates to each postcode after considering demographic and other variables in those postcodes. The ranges produced for the model are based on the variation in predictions using these multiple decision trees.

The MLR model of spend estimates the relationship between postcode participant characteristics, other demographic characteristics and spend per person, for each spend category. The MLR model allows for correlation in errors for different categories of spend to ensure more robust modelling.

To ensure robustness, modelling is evaluated out of sample through tenfold cross-validation. This procedure splits the available data where the NDIS is currently rolling out into ten subsamples, and then trains a model on nine subsamples, and evaluates performance against the remaining subsample. The procedure is repeated ten times, such that each subsample is tested against, and the average performance of the model is compared to a naïve mean prediction model across two criteria:

Current demand is defined as the demand for NDIS services over the 12 months period from 1 July 2019 to 30 June 2020, including: the number of participants with active plans by postcode, and the total spend on NDIS services provided during the specified period by postcode. Please note that the scheme is currently in a stage of rapid growth. The figures reported for the specified 12 month period in the past should not be considered as an approximation of the demand for the upcoming year, particularly for those postcodes where transitions happened recently.

Users should note that the spend on ‘in-kind’ services during this period is also included in the current demand. In-kind arrangements are temporary funding arrangements, put in place when the NDIS started rolling out across Australia. Under these arrangements, state, territory and/or Commonwealth governments continue to pre-pay providers to deliver some disability-related programs. For more detailed information about in-kind support, please visit following pages on NDIS website:

There is a toggle made available on the Demand Map to allow users to switch between current and forecast demand figures.

To protect privacy, current demand figures are not available for postcodes with very low populations or with low number of NDIS participants residing in the postcode.

These forecasts have been produced by the Department of Social Services and Accenture Strategy. Every effort has been made to provide the most current, correct and clearly expressed information possible on this site. Nonetheless, inadvertent errors can occur and applicable laws, rules and regulations may change. The information contained on this site is general and is not intended to serve as professional advice. No warranty is given in relation to the accuracy or reliability of any information. Users should not act or fail to act on the basis of information contained herein. Users should not rely on the information for any business, commercial or other purpose, and are strongly encouraged to seek professional advice concerning the information provided on this site before making any decision. Users should not rely on sum categories or sum totals across postcodes, as this will produce inaccurate results. Users should not use this tool for the purpose of re-identification. All contributors to this site disclaim all and any liability to any person or organisation in respect of anything, or in consequence of anything, done or omitted to be done by any person, organisation or other user in reliance, whether in whole or in part, upon any information contained herein.

No part of the text or graphics on this site may be reproduced or transmitted in any form or by any means, electronic or mechanical, including by photocopying, facsimile transmission, recording, re-keying or using any information, storage and retrieval system. Certain links on the site lead to resources located on servers maintained by third parties. As such, no representations are made as to the accuracy, currency or any other aspect of the information contained on such servers or the timely, accurate or complete transmittal of such information.

Appendix A: How do the demand map categories reflect the NDIS registration groups?
See Demand